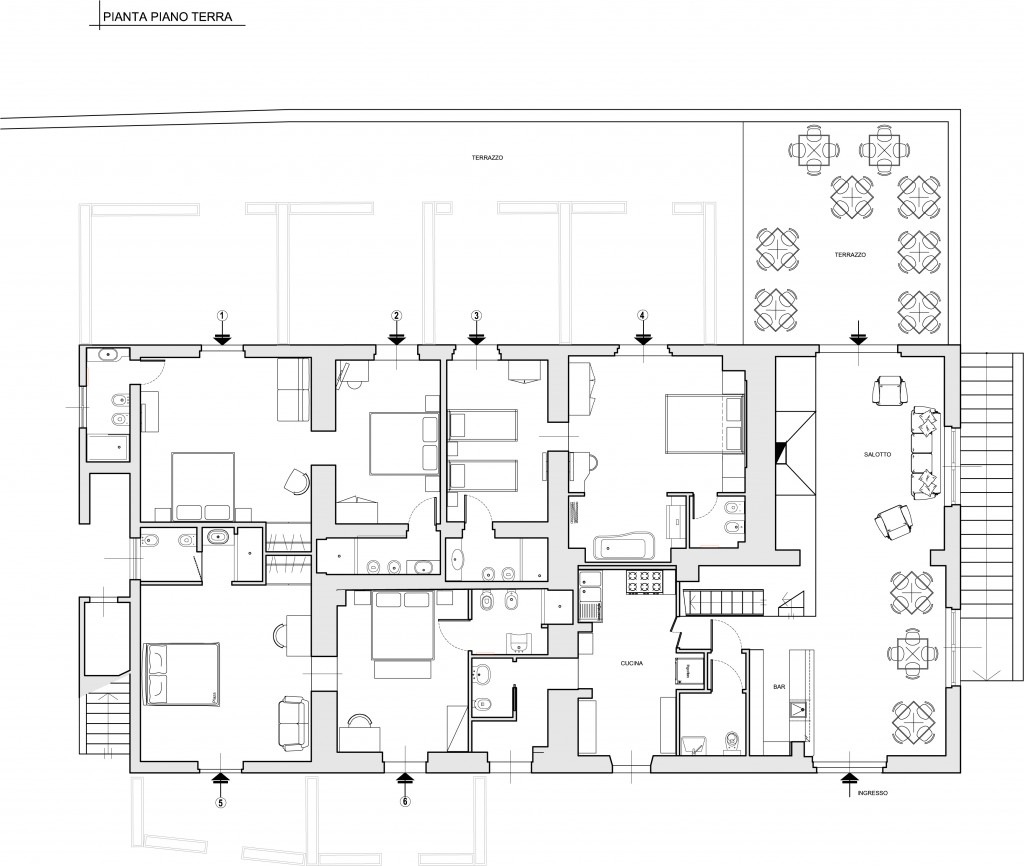 The basic idea underlying the architectural plan of the La Cianella agricultural tourism project is that of making the use of the bedrooms as independent as possible so as to provide the guests with the greatest possible privacy while at the same time creating common spaces for occasions when they can share each other’s company in a convivial atmosphere.
The second goal was to design the distribution of spaces in such a way as to ensure a high degree of versatility. The use of the bedrooms can be changed to meet the requirements of the guests, from a single to a double bedroom, to a suite of rooms or to a complete flat, thanks to the interaction between communicating rooms. The space required can thus be extended, contracted, or developed based on demand and requirements.

Each bedroom has autonomous access from the outside together with a door connecting with the adjacent bedroom allowing communication between the two if desired. This possible combination of the bedrooms has been rendered easier and more natural by the use of the same materials in both.

Particular attention has been given to the choice of materials to create ambiences satisfying different tastes and evoking different connotations, ranging from traditional cotto tiles enriched by the colours of the characteristic Spanish cements to the modern stoneware taking its inspiration from local stones such as tuffo and the marble mosaics used in some rooms as wall tiling. In the same way particular care has been given to the design and choice of bathroom components, considered of fundamental importance in contributing to the comfort of guests.

The choice of finishing has concentrated on warm and lively colours, the use of different shades of Nadore stone for the mantelpieces and chestnut paling to delineate farm paths. These have been dictated by the wish to achieve our initial goal, to create a place where architecture and the natural environment can live in harmony, establishing the conditions required to practice the art of hospitality.

Indeed, in the end, once the place and spaces have been created, the paths and fittings, the services and the various functional requirements, what remains is precisely this: the ability to welcome our guests in such a way that they feel well looked after and at their ease.